China is the largest coal producer and consumer. The huge coal consumption in China encourages foreign coal producers to expand their production capacity. In addition, overseas coal mines are mostly opencast ones, which makes it easy to increase production. However, coal production in China is restricted by environmental protection policies and other factors.

In recent years, some small and medium-sized coal mines had to cut or even stop production because their environmental protection facilities failed to meet standards. Meanwhile, the rising mining costs have made the coal prices in China higher than the international coal prices. For example, in 2019, the average price of imported coal was only US$78 per ton, about 10% lower than that of domestic coal.

According to CRI’s analysis, the logistics costs for imported coal are very low because imported coal mostly enters China by sea. While the logistics costs for domestic coal are far higher because the prices of refined oil are more expensive in China than in other parts of the world, and the expressway tolls are excessively high. Therefore, China imports a large quantity of coal every year. 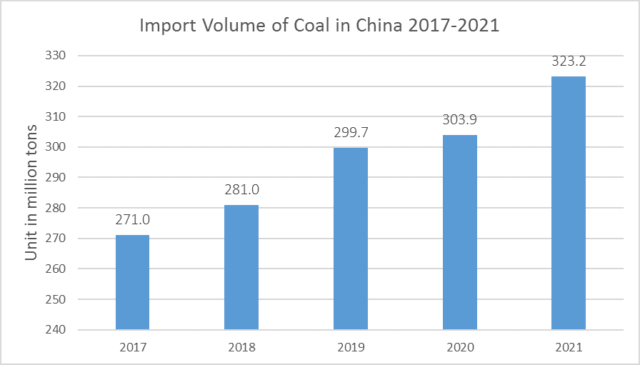 Coal imports are classified into anthracite, coking coal, other coal, other bituminous coal and lignite. The first three types of coal are used for thermal power generation and collectively called as steam coal in China. China’s coal imports are dominated by steam coal that has a low average price.

According to CRI, coal import can bring the following benefits to China: (1) Appropriate amount of coal imports can suppress the price fluctuations and speculation on China’s coal market so that the downstream industries can maintain stable production and operation; and (2) the import of high-quality coking coal that China lacks can promote the development of China’s coke and metal smelting industries.

1.4 The Impact of COVID-19 on China’s Coal Imports

3 Analysis on Coal Supply in China

3.3 Production Volume of Coal in China

4 Analysis on Coal Demand in China

4.2 Consumption Volume of Coal in China

4.3 Market Size of Coal in China

5 Analysis on Coal Import in China

5.1 Scale of Coal Import in China

6 Analysis on Coal Imports by Type in China

9.2 Forecast on Import Volume of Coal in China

9.3 Forecast on Types and Major Sources of China’s Coal Imports

There are no reviews yet.