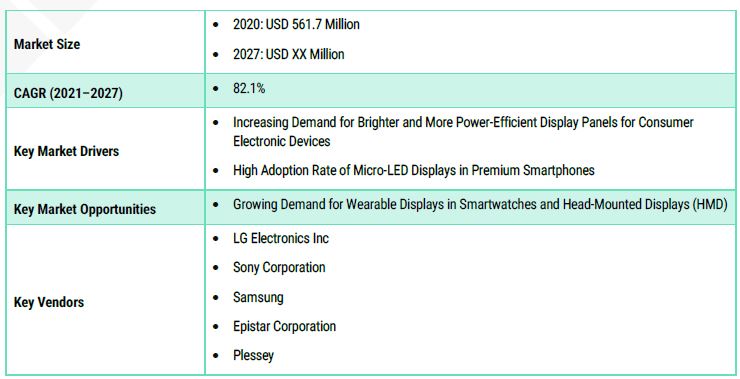 What are Micro LED displays?

Micro-LED is a technology used in displays consisting of microscopic light-emitting diodes of different colors arranged into an array. Micro-LED is also known as micro-LED, mLED, or µLED. An LED display technology features several tiny pixels. Micro-LED is a true LED emitter such as OLED and plasma rather than the backlight source in an LCD/LED TV.

Increasing demand for brighter and more power-efficient display panels for consumer electronic devices and the adoption rate of micro-LED displays in premium smartphones are anticipated to boost the market growth.

However, the lack of standard procedures for manufacturing micro-LED display components hampers the market growth. Furthermore, the growing demand for wearable displays for smartwatches and head-mounted displays (HMD) is expected to create opportunities for the global voice assistant market players

“The global micro LED display market size was valued at USD 561.7 million in 2020. It is expected to expand at a compound annual growth rate (CAGR) of 82.1% from 2021 to 2027.” according to the latest market research: Micro-LED Display Market—Forecast till 2027 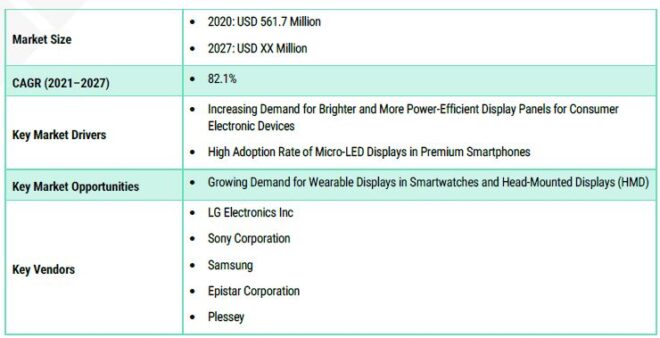 How can Micro LED display Market be segmented?

The global micro-LED display market has been segmented on the basis of application, panel size, verticals, and region.

Based on vertical, the micro-LED display market is segmented into consumer electronics, entertainment & advertisement, automotive, aerospace & defense, and others

Who are key players on Micro LED display Market?

LG ELECTRONICS INC (FOR REFERENCE ONLY)

What factors can drive the Micro LED display Market?

INCREASING DEMAND FOR BRIGHTER AND MORE POWER -EFFICIENT DISPLAY PANELS FOR CONSUMER ELECTRONIC DEVICES
Due to the rapid emergence and availability of new technologies, the consumer electronics industry is one of the fastest-growing industries in the world. Rapid technological developments to meet customer needs will offer business possibilities.

Consumer gadgets such as smartphones and laptops are becoming more popular in developed and developing countries due to rising per capita disposable income, high population growth, and Internet penetration. Several economies have seen an increase in the penetration of these gadgets because of ongoing critical technical advances.

The two most common flat panel display technologies are liquid crystal displays (LCDs) and organic light-emitting diode (OLED) displays. LCDs have replaced large and heavy cathode ray tubes (CRTs) as the dominating technology since the 2000s. However, they are permissive and require a backlight unit (BLU), which increases the screen thickness while also limiting flexibility and form factor.

Due to their superior unparalleled dark state, thin profile, and freeform factor, emissive OLED displays have gained traction in recent years and have fiercely fought with LCDs in TVs and smartphones.

However, there are still some crucial difficulties to be addressed, such as burn-in and longevity. Micro-LEDs (μLEDs) and mini-LEDs (mLEDs) have recently appeared as next-generation displays; the former is especially appealing for transparent displays and high brightness displays, whereas the latter can serve as a locally dimmable backlight for high dynamic range (HDR) LCDs or as emissive displays.

Each technology has its own set of benefits and drawbacks, but when it comes to displaying power efficiency, one stands out significantly. The growing demand for brighter, more power-efficient display panels for smartwatches, smartphones, televisions, and AR/VR devices is likely to propel micro-LED display technology development and commercialization.

The keen interest of tech giants such as Apple, Samsung, and Sony in micro-LED display technology is expected to hasten the commercialization of the technology.

For instance, Samsung and Sony are focusing on large-panel signage and television applications, while Apple is more likely to commercialize the technology for wristwatch applications. Moreover, the adoption of micro-LED displays is also anticipated to increase due to continued research by input suppliers to establish a solid supply chain.

Thus, the increasing demand for brighter and more power-efficient display panels for consumer electronic devices is expected to drive the growth of the global micro-LED display market during the forecast period.

What objectives are Micro-LED Display Market—Forecast till 2027?

Request a sample for reviewing